‘The Wolf of the Seas’: Thomas Cochrane, Britain’s Forgotten Hero

When we think of British history it is impossible not to cast our minds to the great leaders and fighting men that have seen Her through continental wars. The likes of Horatio Nelson or The Duke of Wellington romantically fill our history books with daring stories of how they saved the continent from itself. Yet, there are some who are forgotten. One in particular was a daring admiral who was admired by Napoleon himself, but has been often overshadowed by the triumph of Nelson at Trafalgar. His name: Thomas Cochrane. Cochrane was an admiral, who was once dubbed by Napoleon as the Wolf of the Seas whilst his exploits in helping many South American colonies gain their independence earned him the title of El Diablo (The Devil). While not in the navy, he was a politician who campaigned for electoral reform and eventually grew old enough to see it happen. However, this brilliant British admiral is forgotten by history as he is only remembered through a museum in Chile; a surprising fact, considering his exploits would not be out of place in an action movie. 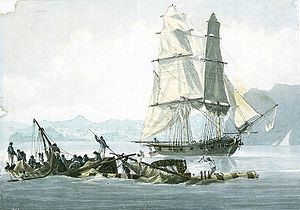 Thomas Cochrane joined the navy in 1793 as a young sailor under his uncle’s command and quickly flourished. He served on a variety of ships under various commanders, and even briefly met Horatio Nelson who told the then 23 year old lieutenant: “never mind manoeuvres, always go at them.” Cochrane was given command of his first ship, HMS Speedy, in 1800 and quickly gained a reputation for himself. He sailed dangerous waters, encountering opposition which often outgunned him yet still managing to get away. Cochrane first gained notoriety on a more continental level when he managed to capture the Spanish frigate El Gamo which out-manned him five to one and contained more guns. It is said that during his time aboard the HMS Speedy he managed to capture, burn or drive ashore 53 ships, leading Napoleon to dubb him ‘The Wolf of the Seas’. He was finally captured by the French in 1801 after being surrounded by 3 French ships. Following his release, he was briefly given a fluff mission by the navy due to his feud with the admiralty. However, when William Pitt the Younger came into power once more, he was again given a ship and told to cause havoc. Most notably he managed to seize a fort on the coast of Spain, an action which delayed a 6000 strong French army in the process. In 1809, the admiralty personally asked him to lead a flotilla of ships to Rochefort to help destroy the French fleet there. Cochrane planned to send in fire ships and exploding vessels to destroy French fortification before being reinforced by a fleet led by his superior Lord Gambier to pick off the remaining French ships. The plan went smoothly up to the point where Gambier was supposed to reinforce with his fleet. Gambier refused to move his ships, citing the danger of losing men. Cochrane, frustrated at his superior’s incompetence, went ahead with the attack anyway despite being outgunned. He did well but had Gambier been there, more ships would have been destroyed.

Following this attack, Gambier was given all the credit. Gambier was set to receive a vote of thanks in the House of Commons and, as an MP, Cochrane decided in anger to vote against it. This caused quite a stir and Gambier insisted on being court-martialled to protest his innocence in the matter. The court was loaded with many of Gambier’s friends and unsurprisingly, Gambier was acquitted. Cochrane had his reputation tarnished and as a result was not used any more in the navy. However, this was not all that was to go wrong for Cochrane. In 1814, it is claimed that he was embroiled in a scam on the Stock Exchange. While he protested his innocence a court found him guilty and he was placed in jail. He was left disgraced and his Order of Bath and his knighthood were stripped off him. Quite astoundingly, in 1815 he was re-elected as an MP while imprisoned and he broke out to take his seat in parliament. Of course, he was re-captured and served his sentence. He was released later that year and he continued his radical political career, attempting to cause havoc in parliament.

Cochrane clearly couldn’t stay away from the seas for long. He was lured away to South America as a naval mercenary where many colonies were attempting to rise up against the Portuguese and Spanish. It was here where he truly flourished. He took control, firstly, of the fleet in Chile and plundered the Spanish with great success. Spanish sailors would refer to him as El Diablo and many would flee when they saw his fleet approach despite outgunning him. Cochrane managed to capture one of the most defended ports in Chile through a series of trickery and deception, and in the process only lost 7 men. His reputation spread and following victory he was recruited to help liberate Peru. Cochrane took control of a handful of ships and an inexperienced crew, yet wrested control of the seas from the Spanish. A couple of years later, he accepted a job from Brazil and managed to deliver control of the whole of Northern Brazil to the rebels lead by Pedro within 6 months. His reputation saw the Portuguese evacuating an entire city without him having to even fire a shot. There is no doubt that he played a pivotal part in liberating much of South America from the Spanish and Portuguese.  Although Cochrane was clearly in his element, he also had a wife and a child whom he had to care for.

Return to the UK 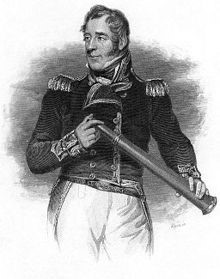 Cochrane ended his escapade in South America in 1825, deciding it would be better for his family if they returned with him to the UK. Incidentally his ship flew the flag of Brazil, and as Cochrane sailed into Portsmouth harbour he saluted. The salute was returned making it the first time any foreign power recognised the state of Brazil. While Britain had survived the post-Napoleonic turmoil, surprisingly little had changed politically. In the coming years, however, parliament would push through the Great Reform Bill and Queen Victoria would ascend to the throne. With this, the government looked more sympathetically on Cochrane and pardoned him from his involvement in the Stock Exchange Scandal. Moreover, his Knighthood and Order of Bath were reinstated.  Barring a brief stint with the Greek navy and their fight for independence, Cochrane was not to do anything movie-like again. Instead, in 1848, he was given command of his squadron in North America at the age of 72. He cruised for three years before retiring, never to set foot on a boat again.  He spent his last years accepting various naval titles from around the world and inventing new machines for the navy. He passed away in 1860 during an operation, an anti-climactic death for this man that history has forgotten.

Robson Martin. A history of the Royal Navy: the Napoleonic Wars. London: I.B, 2014

← The Medieval Museum Musée de Cluny: the value of museums in history.
The problems with Scottish history: anglo-centrism and national identities →