The Role of Monasteries in the Carolingian Empire

The monastery was a key institution within Carolingian society. Throughout the ninth century, they were crucial in the development and production of literary culture; many of the writers working in this period were either monks, or those who had received an education within a monastic community. Monasteries were physical symbols of Christian belief, and were thus used in frontier regions in order to extend Frankish authority and to help build the image of a unified Christian empire. By using the wealth and estates held by monasteries to encourage and reward aristocratic loyalty, Carolingian rulers tied monasteries into the patronage system that characterised relations within noble society. However, for contemporaries the most important function of monasteries was as intercessors between the mortal world and God, not only on behalf of individual patrons, but on behalf of the entire Empire.

Monasteries as Centres of Learning

Ninth-century monasteries played an important role in Carolingian intellectualism, a function that had developed in response to the belief that to fully understand texts, it was important to ‘digest’ their spiritual significance.[1] It is interesting that this idea gained popularity at a time when reforms were being put in place to enforce the Rule of St. Benedict, part of which argued that as monastic life acted as a school of service to God, intellectual activity and the 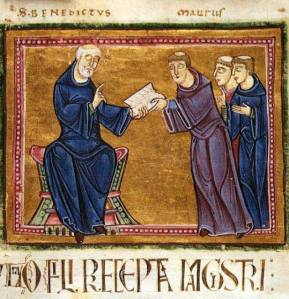 monastic school were of little significance.[2] The scholarly atmosphere fostered by monasteries indicates the influence of the intellectualism encouraged at the courts of Charlemagne and his successors; the writers who contributed to the literary tradition of the Carolingian Renaissance were usually either members of monastic communities, or part of the small elite that had been educated within them.  Lupus of Ferrières’ letters provide us with insight into the role of monasteries as centres of early medieval academia. In a letter to Einhard, he asks for help in understanding issues raised by his reading of Boethius’ De institutione arithmetica, and also mentions his intention to begin studying the work of Victorius, ‘guided by the grace of God and instructed by you.’[3] The sense of intellectual discussion present in that letter is reflected in Lupus’ correspondence with Altuin, in which he responds to a number of questions on the pronunciation of certain Latin words, and the nature of comets as portents.[4] Evidently, monasteries and the men educated within them played a key role in fostering academic debate.

Monasteries in the Carolingian Political Network

The late eighth and early ninth centuries witnessed the expansion of Carolingian power over a vast territory that covered much of Western Europe, and monasteries were crucial in the consolidation of this power. One of the numerous policies pursued by Charlemagne and his successors to ensure the survival of their young, vulnerable Empire was the use of Christianity as a unifying force. Through conversion to a common faith, Charlemagne hoped to integrate numerous disparate groups into a Christian Empire; religion offered a framework through which the Carolingian rulers could create some semblance of a shared identity. Michael Wallace-Hadrill has argued that governance could not begin in earnest until the various groups under Carolingian rule ‘spoke the same religious language,’ an idea that is corroborated by C.H. Lawrence’s assertion that ‘religious unity was the counterpart of political dominion.’[5] Monasteries acted as symbols not only of the Christian faith, but also of the power of the Christian Empire and, perhaps most importantly, the dominance of the ruling dynasty. Religious houses in frontier regions such as Aquitaine, Septimania, and the territories east of the Rhine received lavish land grants from the royal government, reflecting the role that they played in securing territories on the periphery; they were an essential part of the effort to colonise newly conquered territories.[6]

The estates gifted to religious houses by the ruling dynasty increased their wealth, and could cause them to become major landowners, leading to the involvement of ecclesiastical communities and their leaders in politics. Although the General Admonition produced in 789 stated that ‘neither a monk nor a cleric is to involve himself in secular affairs,’ the influence wielded by some abbots inevitably resulted in their being drawn into politics outside the cloister.[7] Nithard includes an anecdote in his Histories of the Sons of Louis the Pious that highlights the status and religious authority held by abbots, alongside bishops, and demonstrates the influence that they exercised in state politics. He describes how, having held a council with their magnates to discuss the proposals made by their brother Lothair I regarding the division of the kingdom after a period of civil war over their respective inheritances, Louis the German and Charles the Bald ‘submitted the matter as usual to bishops and priests.’[8] It is possible that Nithard’s decision to include this event was intended to highlight the worthiness of Louis and Charles as rulers; they are shown to be willing to co-operate with religious authorities in decision making. This in turn highlights the influence wielded by ecclesiastical leaders in the secular sphere.

Monasteries were also part of the patronage system used by rulers to maintain aristocratic support for the dynasty and to govern the Empire.  Charlemagne placed his supporters in key abbacies in order to create a power base of royal monasteries, intensifying the involvement of central Carolingian government in peripheral regions.[9] As channels of royal power, monasteries were crucial political institutions within the imperial establishment.  Another example of monasteries being used as political tools can be seen in the response of the surviving Carolingian rulers to Hugh of Lotharingia’s rebellion towards the end of the ninth century. As an illegitimate member of the dynasty, Hugh presented a potential political challenge, which was exacerbated by his actions against Carolingian rule in pursuit of the Lotharingian crown.[10] In an attempt to placate Hugh, the decision was made to grant him the important West Lotharingian monastery of Lobbes; Simon Maclean suggests that this action was taken not only to bind Hugh back into the political hierarchy, but also to encourage him to use the monastery as a base from which to fight the Vikings.[11] In a society that largely relied on patronage as a means of creating and maintaining relations between the aristocracy and the ruling dynasty, monasteries were crucial.

The most important duty performed by monasteries in the ninth century was mediation between the mortal and the divine, a function that was limited to those who lived in a state of religious piety within religious orders.[12] Intercession offered a way to repent for a penitent’s sins, in which monks performed penance on the penitent’s behalf; this perhaps explains the eagerness of wealthier members of Carolingian society to found and endow monasteries.[13] In the handbook produced for her son William, Dhuoda writes that as she nears the end of her life, she needs prayers to be said for her by William ‘and others,’ which could be a reference to the role of monastic communities as intercessors.[14] Lupus of Ferrières refers to intercession in his letters to Charles the Bald as a reminder of his community’s service to the king, stating that if Charles responds positively they will be ‘more willing to intercede’ for him.[15] In a later letter, he refers to the ‘daily prayers for [Charles’] father and mother’ offered by the abbey.[16] The fact that he has chosen to remind Charles of the Ferrières community’s role as mediators highlights the perceived importance of intercession; he clearly believed that it would encourage a reaction in their favour.

Intercession was also believed to be crucial for the security and prosperity of the realm. A capitulary from early 793, which may have been produced in response to the famine of 792, lays out actions to be undertaken by religious authorities on behalf of the king and army, and ‘for the present tribulation.’ The measures prescribed by the capitulary include the singing of masses and psalters, a two-day fast, monetary donations, and care of the ‘starving poor’.[17] This highlights the importance of intercession, and the belief that one of the main duties of religious communities was to act as a sort of ecclesiastical army defending the realm, and to ensure divine protection.[18] Divine intervention was a central pillar in the early medieval Christian world-view, and so faith in the power of monks to intercede was equally essential.

Monasteries within the Carolingian Empire had a range of important functions, which included their role as centres of learning and academic thought within the intellectual atmosphere of the Carolingian Renaissance, and their position as key features of the imperial political system. However, the importance of prayer and mediation between the mortal and the divine in early medieval Christianity placed significance on the intercessory role of monasteries.  The belief that intercession was crucial for both individual souls and the well-being of the state conferred greater prestige on those religious figures with the authority to act as mediators, thus leading to intercession being the most important function of monasteries in the Carolingian empire.

One thought on “The Role of Monasteries in the Carolingian Empire”