When thinking of the courts of the Tudor monarchs we instantly conjure an image of Hampton Court Palace. With its famous redbrick gateway, popularisation in fiction, and reputation as a well-visited tourist destination, Hampton Court has become synonymous with the Tudors; whether as the setting for one of Henry VIII’s great feasts or Elizabeth I’s Christmas festivities, it was an important centre for court affairs throughout the sixteenth century. But Hampton Court is only one of the many palaces used by Henry VIII and his successors. By looking at some of the other important royal residences, we can get a much larger picture of the personality, lifestyle and grandeur of the Tudor dynasty.

The Palace of Richmond was a residence that saw the beginning and the end of the Tudor dynasty. It was built at the start of the Tudor period by Henry VII in 1497 on the site of the smaller Palace of Sheen, and was the place where Elizabeth I (his granddaughter and the last Tudor monarch) died in 1603. Nestled on the banks of the Thames, a few miles from Hampton Court in what is now Richmond in Surrey, the palace was a symbol that effectively conveyed the power and majesty of the English monarchy. It had sprawling gardens that were intricately detailed, a large deer park that became a popular destination for Elizabeth I’s hunting parties, and lavish furniture that filled its rooms. An attendee to the marriage celebrations of Prince Arthur and Catherine of Aragon visited the palace not long after its completion in 1501, and described in detail the wealth and luxury of the interior. He made reference to portraits of the past kings of England, fountains, glass bay windows, and large kitchens and private chambers. Seen from the river, the palace would have dominated the landscape, and its presence asserted the royal power that Henry VII had fought so hard to win on the battlefield at Bosworth by defeating Richard III.

Like Richmond, Greenwich Palace (often referred to as the Palace of Placentia) was also rebuilt by Henry VII, and his wife, Elizabeth of York, helped in the redesign of the palace interior. Their son Henry VIII was also born here, along with their granddaughters Mary I, and Elizabeth I. It was said to be a particular favourite of Elizabeth of York, perhaps because she helped design it, and it continued to be a popular place of residence amongst her children and grandchildren. Henry VIII was an avid designer, rebuilding and decorating many palaces; he renovated Greenwich in the early years of his reign. He added stables and towers for a tiltyard that could host large jousts, demonstrating the passion he had for tournaments and p 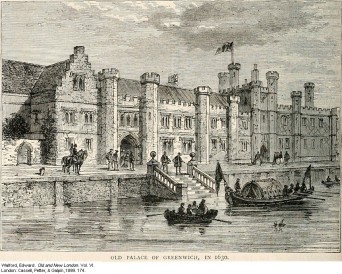 hysical activity in his youth. Many of Elizabeth I’s Christmas celebrations took place here, reflecting its status as her favourite residence, and she often received ambassadors and important guests at Greenwich due to its proximity to the centre of London and the docks, to which envoys were brought from the continent. It is arguably one of the most popular and well-visited palaces of the period, perhaps due to its position on the river close to the capital, the capacity of the great hall to house the entire court, or even for its role as the setting in which many members of the Tudor family were born and raised. Whatever the reason behind its popularity, Greenwich is key to understanding the Tudors; though the seventeenth century Old Royal Naval College now stands in its place, the history of the palace allows modern audiences to understand how the Tudors lived, and how the royal court functioned.

The Palace of Nonsuch has been highlighted as one of the most architecturally advanced building projects in the Tudor period, but also as a visual display of the English Renaissance. The palace was commissioned by Henry VIII in 1538, shortly after the birth of his long-awaited son Edward, in a bid to compete with the lavishness of Francis I’s court in Paris. Though a feat in architectural design with its carved Roman-inspired panels, the palace was unfinished after Henry VIII’s death and was not a main residence for any of the

Tudor monarchs. It was visited only twenty times between 1544 and 1592 – perhaps reflecting its original intention as a hunting lodge – as it lacked the great hall that could house the whole court. Nevertheless, as its name signifies, its unique architectural design and grandeur, a departure from the tradition of many of the other contemporary palaces, meant that there were ‘no such’ palaces like it. The palace represents the opulent and adventurous nature of Henry VIII’s reign and is an important building when identifying how the Tudor monarchy projected itself.

Unfortunately for modern Tudor enthusiasts, many of these palaces no longer survive; whether victim to fire, the destruction of Oliver Cromwell, or, in the case of Nonsuch, the greed of one of Charles II’s mistresses, who had it torn down and the material sold on to pay her mounting debts. Indeed, Hampton Court’s fame comes from the fact that it is one of the only Tudor Royal residences still standing. Though they may no longer be present, it is still important to remember the vast array of other important residences owned by the Tudor monarchy, as they give us a better picture of the lives of arguably our most memorable monarchs. They witnessed their births, marriages and deaths and expand the world of the Tudors that so entices twenty-first century audiences.

← “The King is Dead: The Last Will and Testament of Henry VIII” by Suzannah Libscomb (2015)
Late Medieval England: A Man’s World? →