I Need A Hero: Why Medieval England Needed Robin Hood

A man in tights, a thief and a fox; Robin Hood has been presented in many different ways. To us, today, he is a legend who most will place within the reign of Richard the Lionheart and the evil King John, who fought the Sheriff of Nottingham and fell in love with the beautiful Maid Marian. However, the story has not always been the fairy tale we know it as today. The first mentions of the outlaw hero appear in the fourteenth century, when an outraged monk recorded several men repeatedly missing mass to listen to stories of Robin Hood and other outlaws such

as William of Cloudesley, who was an English version of the famous Swiss archer William Tell. Whilst these stories were orally told to a wide audience, from peasants to courtiers, work by Dobson has uncovered that the most popular audience for these stories was likely to be a middling class of townspeople. The main case for Dobson and other historians who support the claim rests on the word ‘yeoman’ which crops up repeatedly in the tales of outlaws. Yeomen were not only given important protection by outlaws and received help by them, but they themselves were a special type of yeoman; a forester. Why exactly did the middling rank of most societies suddenly find themselves in need of a hero who lived in the forest, robbed and murdered?

By turning a criminal into a hero, what the audience does is condone their actions, even if they are questionable at times. For example, in the story of William of Cloudesley, the outlaws murder ‘thre hundred men and mo’ during their daring escape. Instead of the story being disapproving of their actions, the criminals are rewarded with not only a pardon from the king, but positions of power. What allows them to move from criminals to powerful men, is their outlaw status. People were most often punished with outlawry because of their failure to turn up to court. 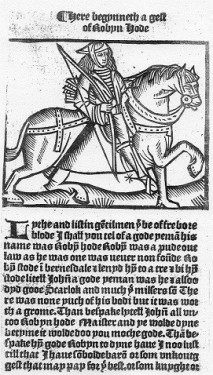 Failure to turn up to court was often a deliberate decision by the defendant because they believed the crime they were accused of was unjust or because they knew they would be unable to win their case. During the late fourteenth century, many had chosen the life of an outlaw over being imprisoned for breaking the Statute of Labourers which had tried to limit wages for the benefits of the elite. This feeling of dissatisfaction towards laws which were in place only for a privileged few comes across in Cloudesley’s story. Accused of killing a deer, instead of facing condemnation, he is lamented as a ‘false thefe’. Outlaws not only come across as victims because they are being hanged or imprisoned for a crime many saw as being unjust. Outlaws were seen as heroes because by denying the elite a chance to punish them for daring to step above their station, they undermined the unfair laws, and the elite’s control. By choosing the life of an outlaw they in the most powerful way showed their dissatisfaction with the law because they would rather live outside of society rather than live in an unjust society.

The new society the outlaws create for themselves is a wonderful fantasy that highlights their desires. Much like The Land of Cockaygne, and other utopian literature, the outlaws who live in the forest have an abundance of food ‘swannes and fessauntes they had full gode’. When this poem is recorded as becoming increasingly popular, the Black Death in England was at its peak. Food had been scarce before the plague had hit England, with a large boom in the human population and several bad harvest’s. Cities in particular were struggling to bring in enough food from the countryside to feed the population, and what little was brought in was being served to the rich for their extravagant banquets. The death of half the population did not ease the situation until a few years after the Black Death due to the fact that the disease also killed off farmers. Robin Hood’s land where food could be hunted, and shared with those who had nothing, was the wish of the hungry people. The forest itself was also a very familiar symbol in utopian literature of freedom and nostalgia. Other poems from the era which spoke of forests claimed they were peaceful and covered most of England. The forest was an escape for many of society – the wars, the plague, economic crisis. Having Robin Hood living in a forest society, the people are conjuring their dream society which is peaceful, full of food, but it is also just. The people Robin Hood judges at his table are all from the elite section of society; a knight, a sheriff and a monk. However, unlike the officials in the audience’s world who use the system to maintain the social hierarchy, Robin judges his guests on their crime and their crime alone; the Knight for example is actually helped by Robin. A fair justice system to these people was as important as food and peace.

The portrayal of the officials in the outlaw hero stories shows a deep dissatisfaction with those who had the most contact with our middle class audience; clergy and sheriffs. In Robin Hood’s The Gest the corrupt Abbot of St Mary’s abbey is made a fool of by the Knight. Whilst the audience knew the Knight had the money to take back his lands, he begs for more time which the

Abbot refuses. Turning then to the Sheriff for help, he finds him bribed by the Abbot. This story is a negative commentary on what was happening at the time. Sheriffs and other justice officials took many bribes during court proceedings that would guarantee whoever could pay more would get the outcome they desired. Just like in the story, the Knight who is meant to represent the poor at this stage, as that is what they believe him to be, the Justice does not care about a fair system so long as they profit from it. In Cloudesley’s story, the Sheriff is so concerned with punishing William for breaking an elite law that he sets fire to a house with innocent women and children in it. He appears barbaric and uncaring as long as he gets the outcome he wants, which in this case is William’s capture. Clearly the officials in these stories are the villains: corrupted, aggressive and selfish. This in itself is evidence that the stories were used to show the audience’s dissatisfaction with the elites they came in contact with. Furthermore, by casting them into the position of villains, they make the outlaws the heroes. As heroes their actions are all justified, even when Cloudesley and his companions kill all the officials of their town. Justified violence towards corrupt officials was seen during the Peasants Revolt when the Archbishop of Canterbury and Robert Hales were executed on Tower Hill, where traitors to the crown were sentenced. In a way, by having heroes celebrated in the outlaw stories for acts of violence against officials, the audience is also celebrating those who acted violently against similar figures during the Revolt. That violence was being celebrated even in the stories shows how deeply the people felt a dissatisfaction with the justice system.

We All Love An Underdog

Robin Hood was the first in a long tradition of people favouring the underdog, or criminal. Highwaymen, bandits and gangsters have joined the man in green tights as a stranger living outside of society in order to judge and correct it. Reflections of outlaw stories like this one provide us with a good insight into the problems in each outlaw hero’s society, and the desires of those reading their tales.

Dobson, R. B. and J. Taylor, Rymes of Robin Hood: An Introduction to the English Outlaw, (Stroud: Sutton Publishing), 1925.

Musson, Anthony, Medieval Law in context: The growth of the legal consciousness from Magna Carta to the Peasants Revolt, (Manchester: Manchester University Press), 2001.

Spraggs, Gillian, Outlaws and Highwaymen the cult of the robber in England from the Middle Ages to the nineteenth century, (London: Pimlico), 2001.

← An Analysis of Slave Hierarchies in Django Unchained
“The King is Dead: The Last Will and Testament of Henry VIII” by Suzannah Libscomb (2015) →

3 thoughts on “I Need A Hero: Why Medieval England Needed Robin Hood”