More than just a mob? The Justice System as a Motivating Factor behind the Peasants’ Revolt of 1381

The Peasants’ Revolt took place from the 13th – 15th June 1381 when rebels stormed the city of London. The mob’s attack, as recorded by chroniclers, was mindless and animalistic, targeting people, prisons and property [1]. The most horrific attacks recorded were those on John of Gaunt’s Savoy Palace [2] and the murder of the Archbishop of Canterbury, who was dragged from the Tower of London to be executed on Tower Hill [3]. The revolt was finally suppressed after the death of one of the rebel leaders, Wat Tyler, and Richard II promised no harm would come to the rebels if they went home. Despite the name given to the revolt, the majority of the mob were townspeople: the leaders often held official positions such as bailiffs, jurors and constables [4]. Looking at other writs, records and the laws before the Revolt, it appears it was in part motivated by the justice system.

The justice system is what people had to go through to deal with legal issues; from obtaining a lawyer to the judge’s final decision. When marching through London, the rebels demanded the death of every lawyer and, at times, physically assaulted them [5]. These actions committed collectively by the mass suggest that there was a wide range of resentment for the figures that were expected to bring justice to every person in society. If the rebels’ motive was a feeling that the people who were meant to give justice were failing, it makes sense that they marched to London to demand it from the king, who was portrayed as the figurehead of justice. Overall, what is implied through their actions is that the justice 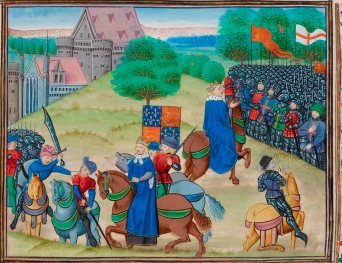 system was not working for them. If it was not accessible to the lower classes, it would be logical to assume that to get justice was expensive or that it was hard to find a lawyer. However, after examining the system’s structure, it becomes apparent that it was easy to access. Lawyers frequently travelled the country, so it would not be beyond the people’s power to ask for legal advice or find an attorney. In terms of cost, large subsidies were made for those who begged poverty – some lawyers even accepted payment in material forms such as butter [6]. On the other hand, in literature such as Piers Ploughman by William Langland [7], the feeling of a failing system comes across again. In Langland’s poem, it is the judge who becomes corrupt by accepting Lady Meed’s bribe, so the outcome is in her favour. Corruption of the judges through money was a problem that spanned most of the Middle Ages. However, it was not just a problem that concerned the lowest levels of society. In an attempt to stop corruption, legislation such as the nineteen articles of 1246 was introduced. The nineteen articles focused on the punishment of sheriffs who tried to create lawsuits to better themselves, and officials who took bribes from both parties [8]. Given that the justice system was easy for every class to access and the length of time corruption had been a problem, with many steps taken to limit how often it actually affected court proceedings, it seems doubtable it was the system of justice itself that had been the main motivation of the rebels in 1381.

It seems more probable that the revolt was linked to a change that had occurred closer to the date it took place. The Statute of Labourers was introduced in 1351 and sought, during the turbulent times of the Black Death, to regulate the increasing wages of labourers and punish those who tried to run from their masters. It was people prosecuted by laws like this one who were sprung from the prisons of London during the revolt. Robert Belling, a prisoner in Fleet prison, was incarcerated for failing to pay an enfranchisement fine due to poverty [9]. Legislation such as this was clearly seen as unjust, not only from the fact that the rebels released men accused of seeking a better wage, but also because many who were accused of the crime fled to the forests and lived as outlaws [10].  Living as an outlaw was seen by many as a protest against the law itself: if the law was not going to protect the people, it was better to live outside of it [11]. Coupled with the hints from chroniclers, the ballads of outlaw heroes such as Robin Hood were being spread around this time; it also seems reasonable to assume that those who stayed inside the law held sympathy with the men who chose such a life [12]. Whilst it could be argued that it was the judges and therefore the justice system itself that was corrupt, corruption of judges had been punished severely for years. If anything, the amount of people brought to court for disobeying the law showed a continued efficiency in the system. By having an unfair law that oppressed the people, the justice system, as it was used to implement the law, became something that was also seen as unjust. In addition, it explains why the rebels called not just for the death of lawyers, but also for the writers of law. Their targets were not parish lawyers but the highest-ranking officials in government or, in other words, the men who would have had a hand in making such laws. Given the timing of such laws, which clearly aggravated the people, combined with the type of target the rebels went after, it appears that the rebels were more motivated by what they felt were unfair and oppressive laws.

A System for the Rich

The Statue of Labourers limited not only people’s wages, but also their right to move around, making them something akin to serfs. Considering only a minority of the rebels can be confirmed as being ‘serfs of blood’ [13], it seems likely that the rebels felt themselves being reduced to the status of serfs through the law and that this was their reason for their cry to end serfdom. For the men of Kent, a county that had no serfdom, they probably found the extortionate poll tax an oppressive measure of the rich to get richer. Under the laws implemented during the era preceding the revolt, there was a crushing of the lower levels by the rich, caused in part by the increased opportunity for social mobility the Black Death had created. The motivation of fighting against oppressive measures also helps in part to explain those above peasant status who joined in in the rebellion. For example, in Cambridge, it was the bourgeoisie who used the peasants in order to overthrow the current ruling elites to establish themselves in a position of power [14]. Similarly, the rebellion that broke out in York, close on the heels of the revolt in London, seemed to have been fuelled by a struggle for power between the council of the town and the merchants [15]. The case of York is particularly important: as the city in the North, it was seen to represent nationwide concerns, much like London did [16]. It therefore seems a little more than a coincidence that, whilst in London, it was the ‘peasants’ who tried to over throw those seeking to oppress the people, in York, it was the merchant class who were feeling the pinch of the elitist circle prior to the peasants’ revolt. It would appear that the feeling that the upper classes were overstepping their right to power by the ruthless crushing of all those under them was upsetting more than just the peasant class. For this reason, it should be considered another of the motivations that drove the rebels to revolt in 1381.

The masses of men who stormed the city gates of London in the hot summer of 1381 were not an unintelligent mob of angry peasants. The controlled burning of legal documents in communal areas and the executions on Tower Hill showed conviction and carried a message. The justice system, which had been surprisingly accessible to all tiers of society, was becoming a tool for the elite to oppress the people. Whilst other factors such as the Hundred Years War and the Poll Tax also added to the passion of the Revolt and should not be ignored, the mob’s actions indicate a strong grievance with the justice system that is often overlooked when examining this event.