From Technonationalism to Superficial Environmentalism: Japan’s Olympics as a Political Tool

A political Olympic Games may appear contradictory, due to an official statement from the International Olympic Committee, claiming the political neutrality of the Games. Previous Olympics such as Berlin 1936 and London 1948 were tied to propaganda, war, and political showmanship. However, throughout the 20thcentury, the Olympics have come to symbolise peace, diplomacy, internationalism, and represent political power. Tokyo 1964 and Tokyo 2020 serve as powerful examples of the political potentiality of the Olympics, and powerful comparisons on the continued benefit of the Olympics in Japan. Throughout the 1964 Games, and in the current run-up to the 2020 Games, Japan has exerted and gained political power through several similar processes. Rather than looking at the rather obvious winning of events to show national strength, I will assess in particular the importance of nuclear devastation, imperialism, and “technonationalism” versus environmentalism to show some of the ways Japan has politicised the Olympics.

Despite changes in the political and physical climate from 1964 to 2020, Japan has utilised the competition to gain international and domestic power. Specifically, ‘soft power’, a term coined by Joseph Nye in 1990 within the context of the Cold War. Whereas ‘hard power’ is based on tangible resources such as gross national product (GNP), the military, and formation of a physical empire, ‘soft power’ is measured by ideology, international respect, and for Japan, what E. Taylor Atkins refers to as ‘gross national cool’.

Japan’s ‘hard power’ was taken away through the country’s defeat in the Second World War, subsequent American Occupation, and demilitarisation policy. Therefore, in a post-war world in which Japan’s international image was all-but destroyed, the Olympics served as an attractive opportunity to display ‘soft power’ and regain international recognition as a peaceful country.

From 1945 to 2011, Japan has experienced more nuclear devastation than any other nation. John Dower argues Hiroshima and Nagasaki became ‘icons of Japanese suffering’ in the 1950s and 1960s, fuelling a strong anti-nuclear movement in the country. The bombings’ presence was felt during the 1964 Games, as a student born on the day America’s bomb fell on Hiroshima, Yoshinori Sakai, lit the Olympic flame. Japan’s remembrance of the bombings established the tone of these Games as one of resilience and national strength. It also reinforced, especially to America, the image of Japan as an innocent victim in the war. This is despite Japan’s expansionist foreign policy and Empire from 1868 to 1947. Japan reclaimed its experience of nuclear destruction to contribute to the country’s national image and ‘soft power’ at the Olympics. 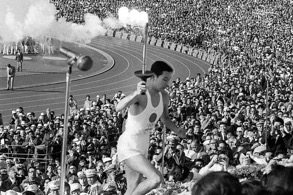 The country’s complicated relationship with nuclear power developed when American influence led to Japan’s adoption of nuclear energy through Eisenhower’s “Atoms for Peace” campaign. On 11thMarch 2011, Japan became a nuclear victim once again. The Fukushima nuclear power-plant disaster proved that Japan’s adoption of ‘peaceful’ nuclear energy was not sustainable. In 2020 nuclear disaster will be used once again, as the torch relay will begin the Japanese leg in Fukushima. The similarities here show Japan’s eagerness to make their relationship to nuclear power more positive and establish itself as a peaceful victim as an aspect of ‘soft power’.

The Legacy of Imperialism.

A point of contention and controversy at both Games has been the inclusion of Japan’s ‘Rising Sun’ flag (Hinomaru). The flag, although not made the national flag until 1999, has strong ties to Japan’s imperial past. In 1964, a redesign of the original flag attempted to reinvent it as a symbol of democracy and internationalism, as Christian Tagsold argues. The flag is to be used again at the 2020 Games. Despite Japan’s view of the flag as peaceful, the imperial connotations have not diminished. Recently, in September 2019, South Korea made a formal request for the flag to be banned at next years’ Olympics in Tokyo, but Japan have refused. This diplomatic row is ongoing and threatens relations between the two countries, as a South Korean MP described it as Asia’s equivalent to a swastika. The request originates in Japan’s war crimes and the use of girls and women from South Korea country as “comfort women” by Japanese soldiers during World War Two. Whether with imperialist intentions or not, Japan’s use of the flag has evoked painful memories of its past and politicised the Games. 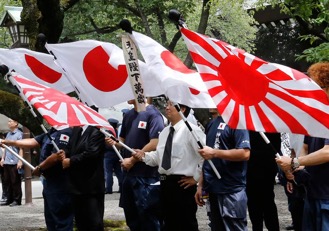 The clearest display of ‘soft power’ by Japan surrounding the Summer Olympics was “technonationalism” in 1964, and environmentalism in 2020 – two demonstrations of international power relevant to the Games’ contexts. Japan’s post-war economic miracle was facilitated by American investment in technology. National power and pride after 1945 and at the 1964 Olympics were derived from Japan’s technological innovations and breakthroughs, such as the Shinkansen bullet train, computers and more precise timing devices. Japan became a country known for its technology companies and products at the 1964 Games. After demilitarisation, technology became a way for Japan to show its national pride, and the rise of consumerism during this period meant it was respected on an international scale.

The world in 2019 values environmentalism far more than in the 20thcentury. A global consciousness of climate change and recognition that waste is not sustainable has increased both individual and collective responsibility for the environment. This will be shown at the Tokyo 2020 Games, as organisers have used recycled smartphones to make the medals. While this shows a public and governmental consciousness for the climate, it should be labelled as superficially environmental. Despite only accounting for 1.64% of the world population, Japan’s carbon emissions account for 4% of the global total, the fifth largest in 2016 according to the International Energy Agency. Therefore, Japan’s commitment to environmentalism within the Tokyo 2020 Olympics cannot be seen as truly genuine, due to the country’s role in climate change. Instead, like technonationalism, environmentalism has been used as a tool to gain ‘soft power’ on the international stage. 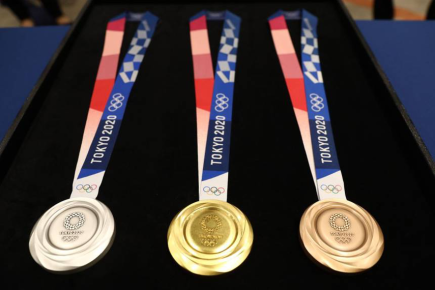 The Tokyo 2020 Olympic medals made from recycled smartphones.

In Japan, the Olympics have not just been seen as an apolitical international sporting event. They have served as a source of ‘soft power’ for the country, from utilising nuclear disasters, to imperial legacies, and international respect through technology and environmentalism. The 1964 and 2020 Games serve as useful comparisons for Japanese politics and history, and an important reminder that the Olympic Games have long had wide-spread implications for geopolitics and international relations, as well as national pride.

Atkins, E. Taylor. A History of Popular Culture in Japan: From the Seventeenth Century to the Present. London: Bloomsbury, 2017.

Merklejn, Iwona. “Sport, Media and Technonationalism in the History of the Tokyo Olympics.” In Routledge Handbook of Japanese Media. Edited by Fabienne Darling-Wolf. Abingdon: Routledge, 2017. 86 – 98.

← An Introduction to the History of Emotions
Netflix’s Cable Girls: A Turning Point in Spain’s National Historical Memory? →