Orwell and “Northernness”: The Road to Wigan Pier

“I liked them and hoped they liked me; but I went among them as a foreigner, and both of us were aware of it. Whichever way you turn this curse of class-difference confronts you like a wall of stone. Or rather it is not so much like a stone wall as the plate-glass of an aquarium; it is so easy to pretend that it isn’t there, and so impossible to get through it.”

Orwell and ‘Northernness’: The Road to Wigan Pier

Over a period of two months in 1936, George Orwell visited industrial towns in Lancashire and Yorkshire to uncover the living and working conditions of the unemployed in the North of England. His research eventually resulted in the publication of The Road to Wigan Pier in 1937. The book is divided in to two easily distinguishable parts; the first section is the direct result of Orwell’s travels around Wigan, Barnsley and Sheffield. It describes what he saw, his physical experiences and the people he met. The second part, on the other hand, is a more direct and pointed critique of socialism and of the English middle classes. Orwell’s classic work is often used by scholars to draw conclusions about class dynamics and division, as the second section is centred around this theme. However, this article will explore the extent to which The Road to Wigan Pier can also be used as a source for investigating another crucial division in 1930s Britain – the North-South divide. Analysis of the text reveals that Orwell had a very clear perception of “Northernness”.

The Road to Wigan Pier was commissioned by Victor Golancz, who was founder of the Left Book Club and a publisher well known for his left-wing sympathies. He directly appealed to Orwell to travel to the North and expose the plight of the unemployed. It is clear that he did not commission what is now known as the second half of the book, and was in fact reluctant to publish it. When the book was reviewed, it was accordingly regarded as a book of two separate halves. Walter Greenwood, author of Love on the Dole, commented in 1937 that whilst the first half of the book was “authentic and first rate”, praising “Mr Orwell’s gift of writing vividly”, the second half left him “infuriated”. Reviews generally praised the first part of the work in particular, as they appreciated the candid and explicit nature of Orwell’s journalism. 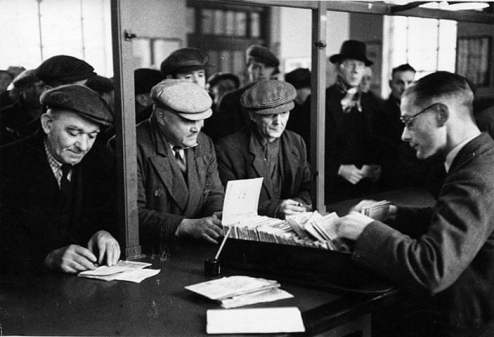 Unemployed men at the Labour Exchange, 1939.

Part One of the work constitutes a contribution to a prominent public debate in the 1930s, in which the middle classes, and people from the better-off South became increasingly concerned with the plight of the working classes and the unemployed in industrial towns. Unemployment was rife in the 1930s; in some Country Durham towns, 75% of the population had been out of work for more than five years. There was sensationalist coverage of ‘hungry England’ in the national press, and sociologists such as Seebohm Rowntree were publicising their findings regarding the poor health of the nation. Rowntree’s The Human Needs of Labour (1937) considers the issue with reference to statistical evidence, and presents solutions designed to increase the physical efficiency of the workforce. Orwell’s intervention in this debate is very different to Rowntree’s scientific report; as a literary source, The Road to Wigan Pier focuses much more on personal experience. The people depicted in their homes or at their place of work become human beings, characters that the middle class would perhaps have never encountered before. James Vernon finds that pre-war works set out the innocence of women and children in poverty, but the economic collapse of the 1930s meant that this sympathy was also afforded to unemployed men, now seen as victims of the markets and the political system. They were given identities by writers such as Orwell, who uncovered their day-to-day experience through living with them as a ‘participant observer’, although as Orwell’s comment about the “plate-glass” indicates, he fundamentally remained to be an outsider. His distance from his subject has usually been seen in terms of social class, but further investigation in to Orwell’s work reveals that he also measured cultural difference in terms of the North-South divide.

Orwell the outsider: The North-South Divide

Danny Dorling has argued that in the 1930s, the North-South divide was a “metaphorical cliff” which split England in to two distinct regions. However, he also contests that whilst this “cliff” is easily discernible for historians who are actively seeking this pattern in health and economic data, it was not discussed by contemporaries. This may be the case in terms of the social sciences, but the notion does not extend to literary sources. Orwell makes comments throughout The Road to Wigan Pier about traits that he views as distinctly ‘northern’, or as indiscriminately attributable to all people from the North. For example, when discussing the issue of housing, he asserts “Northern working people do not take kindly to flats.” This suggests that a ‘northern’ (and therefore presumably a ‘southern’) identity was thought by contemporaries to inform something as intrinsic to everyday life as type of residence. It indicates that Orwell thinks of the people he is visiting as a homogenous group, as it is a general sweeping statement. Orwell also makes more explicit references to a North-South dichotomy in the book:

“when you go to the industrial North, you are conscious, quite apart from the unfamiliar scenery, of entering a strange country. This is partly because of certain real differences which do exist, but more still because of the North-South antithesis which has been rubbed in to us for such a long time past. There exists in England a curious cult of Northernness.” 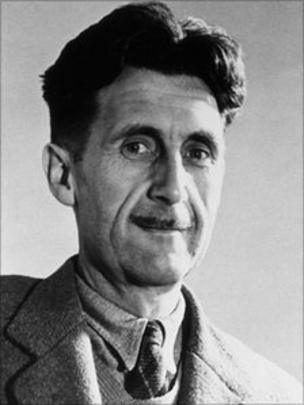 Orwell: A ‘tourist’ in a ‘strange country’?

This is an admission, not only that during his travels Orwell recognised that the North feels very different, but also that the North-South divide was more widely discussed. The above quote, alongside the claims about northern people having an aversion to flats, and comments about the strangeness of mining communities “to a southerner”, could lead to comparisons with other forms of travel writing. Vernon argues that authors wrote about impoverished communities as if they were writing about colonies. Indeed, he may not technically have left England, but it is clear that when Orwell refers to a “strange country” he appears to be thinking of the North as an alien place, with customs and dialects that he finds bewildering. It could be argued that this is a form of ‘othering’. This is consistent with Taylor’s argument that the North has historically been an ‘other’, or the ‘periphery’ to London and the South’s ‘core’. Orwell is not just separable from his hosts in terms of social class, but they also come from opposing sides of the geographical divide. His conception of the North-South divide is so strong that he implies that the North and northerners are fundamentally different people compared to those in the South.

However, this view of the North as a ‘colony’, which Orwell was dispatched to explore and report on, obscures opportunities that northern people were afforded in the 1930s to create their own cultural identity. The Northern Region of the BBC often provided these opportunities. For example, one of the station’s flagship programmes was Harry Hopeful, about an unemployed man touring the North to find work. The fictional character of Harry was simply a vehicle for real-life stories. Thanks to the ‘tour’ aspect of the series, it was able to highlight the variety of culture and customs within the region of the North, something that is sometimes obscured by Orwell. This programme offers a curious parallel to The Road to Wigan Pier; it was recorded in communities around the North, giving real people a chance to speak for themselves on the radio, to a national audience. This is in contrast to the people depicted in The Road to Wigan Pier, because whilst they are humanised and no longer simply statistics in a report, the subjects of the work are never given space to tell their own story – the reader must see the North and its people through the eyes of Orwell.

As Margery Sabin argues, Orwell himself is conscious of his status as an outsider. He is more than aware that he is not, and never will be, truly part of the communities he is observing. He is a tourist, a “novice” in a world in which they are experienced. The fact that Orwell shows this awareness is useful, and means that the reader is consistently mindful of the limits to his access and that there are potentially other stories to be told. It is possible to uncover some of these, with the use of sources such as the broadcasts from the BBC Northern Region and testimonies from the unemployed, some of which were also published by Victor Golancz.

In conclusion, it can be seen that Orwell’s classic text sheds light not simply on the class divisions in 1930s Britain, but also on the significant North-South geographical divide. Orwell can be seen as a travel writer, or a tourist, as he even admits that he could never manage to “break through the plate glass of the aquarium”. Orwell is an outsider, and his writing is therefore of use to historians seeking to understand illustrating southern notions of “Northernness” and their attitudes towards the “strange country”.

Sabin, Margery. “The truths of experience: Orwell’s non-fiction in the 1930s” in The Cambridge Companion to George Orwell, edited by John Rodden, 43-58. Cambridge: Cambridge University Press, 2007.

← Bloodlands: Europe Between Hitler and Stalin, by Timothy Snyder.
The Watergate Crisis: A Re-examination of the Past in the Age of Donald Trump →