On 6th September 1678, eighteen years after the Restoration began and a decade prior to the Glorious Revolution, a former naval chaplain by the name of Titus Oates stood in court before magistrate Sir Edmund Godfrey. He gave a statement under oath. There was, he said, a Popish plot to murder King Charles II.

Immediately the press in London, and elsewhere in Britain, ran the story. Detailed transcriptions of the trial’s proceedings were made publicly accessible. Newsmongers and satirists produced illustrated broadsides and pamphlets based on Oates’ claims. Since such popular print was commonly displayed in public places such as taverns and coffee houses, it was almost impossible to escape news of Oates’ ‘plot’, especially in the capital. It seemed, captivatingly, as though a Catholic conspiracy was maneuvering beneath people’s very noses. In response, fear-driven anti-Catholic sentiments escalated and were exacerbated by the publication of anti-Catholic popular print. It was a positive feedback cycle which culminated in the execution of at least 22 suspected Popish conspirators.

The catch? The Popish ‘plot’ was entirely fictional. Oates’ statement was filled with lies presented as truths – arguably comparable to ‘alternative facts’ in today’s discourse.

Most importantly, those 22 or more ‘conspirators’ were innocent. 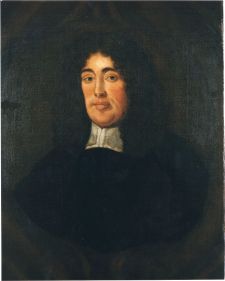 Oates claimed he first heard rumours of the ‘plot’ whilst serving as a naval chaplain in Tangier. Fired from this role, he kept himself out of poverty by co-writing anti-Catholic pamphlets with former clergyman Dr Israel Tonge, whom he met through his father.

In 1678, after a year of being tossed between Catholic seminaries in Spain, France and England, Oates returned to London out of exasperation, where he rekindled his relationship with Tonge. He entertained the fervent anti-Papist with anecdotes of how Catholics had disrespected him, and even warned Tonge that because of his anti-Popish pamphleteering, he may be the target of a conspiracy. When Tonge asked Oates to put all this down on paper, Oates eagerly obliged – arguably because he was pleased to finally have an audience. In 43 depositions, Oates outlined the Popish ‘plot’.

The plan was, he said, to murder King Charles II by bullet or by poison. The King’s Catholic brother James would also be killed unless he consented to the plot. The regicide would provoke uprisings in Scotland, Ireland and England. Oates claimed to have seen letters between his Catholic acquaintances and gave seemingly convincing details of their comings and goings during his year in the seminaries.

Tonge passed on Oates’ depositions to the King via his friend, Christopher Kirkby. The King’s First Minister interrogated Kirkby and Tonge. He didn’t believe their wild claims.They needed a new approach.

On 6th September 1678, Tonge had Oates brought before Westminster magistrate Sir Edmund Godfrey to legally swear in his evidence of the ‘plot’ . This brought it to much wider attention. They then faced a Privy Council investigation, where Oates expanded his accusations to 81 depositions. Notably, he accused Edward Coleman, the Duchess of York’s secretary; the Duchess of York was the wife of King Charles II’s brother James, which made her sister-in-law to the King. Coleman happened to be a potential conspirator; a search of his papers seemed to actually corroborate some of Oates’ story. Thus, despite increasing inconsistencies in Oates’ claims as the interrogations continued, the Privy Council became increasingly inclined to believe him.

Upon Godfrey’s death in October 1678, which the press portrayed as part of the Catholic ‘conspiracy’, Oates was summoned to the House of Commons. He name-dropped five Catholic lords amongst his accusations, which made his story more convincing and added a sense of urgency, whilst additionally accusing relatively minor figures who had antagonized him personally in the past. He stood as a witness in the trials of several accused conspirators, providing extraordinarily flimsy evidence which was nevertheless taken as fact. Whenever he made self-incriminating errors, he fell back on false excuses like his poor eyesight or his selective memory. Widespread anti-Catholic hysteria in the wake of the rapidly unravelling ‘plot’ and the print surrounding it meant that, regardless of this, the courts were eager to sentence the accused: at least 22 men were executed.

Titus Oates: a vengeful anti-Papist, or a man caught up in his own lie?

By 1681, the tide turned against Oates as the authorities began to see through his deception. When he accused the Queen, a devout Portuguese Roman Catholic who was already under scrutiny because of her beliefs, of being part of the ‘plot’, the King had had enough. In 1684 Oates was arrested, and in 1685 he was sentenced to life imprisonment.

Should his legacy be that of a repulsive perjurer, as his contemporaries in 1685 promoted? Or should we entertain the possibility that he was in fact a desperate man who took a lie too far, under the encouragement of people more influential than himself?

There is a case to be made that the ‘plot’ Oates invented was really just an unoriginal, formulaic conspiracy tale akin to many others of his time. Catholic regicidal plots were commonplace in discourse; for example, the 1605 Gunpowder Plot was habitually used in print as a reference point every time a new ‘plot’ was uncovered. Some historians suggest that Oates’ ‘plot’ narrative fitted a contemporary formula: a group of Catholic elites would kill the Protestant King, which would then provoke an uprising, and all this would be uncovered by a man who would, via a well-placed associate, warn the government before it was too late. If it is true that considerable parts of Oates’ story were copied from ‘plot’ narratives he had heard before, can we really consider him a calculated, manipulative scandalmonger? More likely, he quickly found himself of his depth and was forced to improvise based on what he knew.

Alternatively, William of Orange’s portrayal of Oates as a martyr in the late 1680s indicates that he was in fact purposeful in his persistent pushing of the ‘plot’, not merely succumbing to pressure to continue the lie. William saw Oates as a defender of the Protestant faith against Popery, which implies that Oates sought out retribution against potential enemies of the Protestant state through convincing the authorities to execute them. Did Oates invent the ‘plot’ to defend his Protestant countrymen? Or was he more concerned with personal vengeance for his experiences at Catholic seminaries in the preceding years? Either way, this evidence suggests that Oates had his own anti-Catholic motivations and thus was not merely a puppet enacting the wishes of higher-ranking men.

The wider anti-Catholic discourse at the time is also notable. Historian Tim Harris argues that Whig propaganda relating to the Exclusion Crisis was responsible for Oates’ ‘plot’ reaching parliamentary and popular discourse. This Crisis emerged because in 1673 it became publicly known that the King’s brother James, the heir to the throne, was Catholic. His accession would turn England over to Popish tyranny, or so it was perceived. Since Oates’ ‘plot’ involved a Catholic takeover of the monarchy, it reinforced the Whigs’ campaign to exclude James from the monarchical succession. Harris argues that without this political backdrop, Oates’ ‘plot’ would not have so fervently attracted the press and thus the public interest. Perhaps Oates was really a coincidental figure in a predominantly parliamentary issue. Or perhaps he consciously harnessed popular Exclusionist views to promote his own anti-Catholic agenda.

The ‘Plot’ in Popular Print

There is a myriad of popular print which attests to the fact that Oates’ lies were portrayed to the public as unquestionable truths. 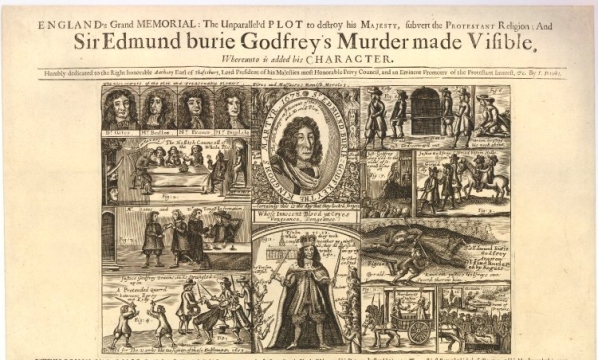 A 1679 broadsheet shows illustrations of different stages of the plot unfolding, with descriptions of the events underneath. The text begins: “The design of this Popish PLOT was to reduce Great Britain and Ireland… under the Tyranny of the Romish Religion and Government.” This shows no doubt about the validity of Oates’ claims, and the capitalisation of “PLOT” alludes to the publisher’s profit-driven primary desire to harness popular interest in the events. The text goes on to describe how, “…you see there several Traytors ready to destroy his Majesty”, which conveys a sense of urgency. It also suggests to readers that Oates had rescued them just in time. Such prints were displayed in public places like squares and taverns so that many people had a chance to see them for free. Nevertheless, the highly detailed engraved illustration alludes to the broadside’s high production cost, which implies that its producers were confident that, for entertainment or as a legitimate source of news, print relating to Oates ‘plot’ had a considerable consumer base. 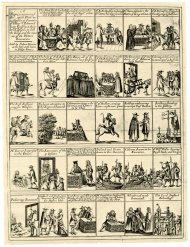 Similarly, a 1681 set of illustrated playing cards depict the unravelling of Oates’ ‘plot’. Notably, the first card depicts the first (fictional) conspiratorial meeting between the Pope and his cardinals, then the second card depicts the 1666 Great Fire of London. Clearly the printer aimed to make the cards’ users assume that the fictional ‘plot’ uncovered by Oates was connected to the real fire that had occurred 15 years earlier. This legitimised Oates’ story, since it was widely believed at the time that the Great Fire of London was started by Catholics who sought to punish the primarily Protestant city. Many cards in this pack depict trials and executions, which indicates that interest in Oates’ ‘plot’ perhaps lay in popular fascination with the gruesome, and with the drama of life-or-death scenarios. Would card players have really paid much attention to such illustrations? Certainly illustrated print such as this offered a chance for the illiterate – a significant portion of society – to hear about the plot in a manner other than word-of-mouth.

These are just two examples of how Oates’ plot was portrayed in print. What is arguably most significant is the effort taken to produce a variety of media covering all stages of this legal and political saga. Clearly, there was a popular demand for anti-Catholic print and news of the conspiracy, and also an enthusiasm amongst writers, illustrators and printers to produce it. Phenomena around this time, like pope-burning processions, where the masses assembled to burn effigies of the Pope as a symbol of opposition to Catholicism, demonstrate that there was some sort of positive feedback mechanism whereby anti-Catholic print fuelled an already fierce anti-Catholic fire.

‘Alternative Facts’ in the Seventeenth Century?

The concept of ‘alternative facts’, meaning the portrayal of false information as truth in order to manipulate public opinion, has cropped up increasingly frequently in recent discourse. This phenomenon is often portrayed as an unwelcome consequence of our present-day dependence on online news sources, like political soundbites and social networking sites. Modern-day people are assumed to be uniquely accepting of news at face value.

However, the ability of lies dressed up as truths to captivate a significant popular audience is not unique to the twenty-first century. Neither is the press’s profit-driven desire to harness and exacerbate sensational popular hysteria as a source of demand. The example of Oates’ fictional Popish ‘plot’, which – via popular print – enraptured late-seventeenth-century public opinion so much that at least 22 innocent men were executed, exemplifies this. It is no coincidence that it happened amid what historians call the ‘print explosion’.

Evidently, ‘alternative facts’ are not new. However, with every news story covered by a multiplicity of perspectives in a multiplicity of sources at our fingertips, we should now in theory have an advantage over our seventeenth-century ancestors. If we were to harness these to make a conscious effort to read between the lines of news media, we would much more easily identify ‘alternative facts’ and confine this whole phenomenon to the past.

Anon., A Representation of the Popish Plott in 29 Figures (London: Sold by Robert Greene, 1681), playing cards.

Harris, Tim. London Crowds in the Reign of Charles II: Propaganda and Politics from the Restoration until the Exclusion Crisis (Cambridge: Cambridge University Press, 1987).

Mendle, Michael. “The ‘Prints’ of the Trials: The Nexus of Politics, Religion, Law and Information in Late Seventeenth Century England.” In Fear, Exclusion and Revolution: Roger Morrice and Britain in the 1680s, edited by Jason McElligott (Farnham: Ashgate, 2006): 123-37.

← The development of America: identity and the language of revolution
Charlottesville, Statues, Free Speech and History →