The Tudors before the Tudors

“The Tudors”: a familiar household name, and perhaps the most famous British dynasty. But where did they come from? Which historical characters caused the eventual accession of Henry VII in 1485? These questions are a mystery for many, with the understanding and interest in the period before the Tudor dynasty still being relatively small in comparison to the huge interest in the Tudors themselves. The “Cousins War” series by Philippa Gregory, and The White Queen BBC series, based on those books, may have looked at this era, yet interest remains firmly with the Tudors themselves. This article aims to consider some of the key Tudors who came before the dynasty – although it does not only follow the Tudor line, but looks at the royal links that gave them a claim to the English throne.

John of Gaunt: Beginning of the Lancastrian Line

Although not a Tudor by name, John of Gaunt can be seen as the founding father of the Lancastrian line with whom the Tudors fought in the Wars of the Roses. His great-granddaughter was Henry VII’s mother, Margaret Beaufort. It was Edward III, Gaunt’s father, who created the Dukedoms in Britain that lead to the rivalries seen in the Wars of the Roses. He was one of the richest men in history, and acted as regent to Richard II. His son, Henry of Bolingbroke, became Henry IV. Gaunt’s first wife, Blanche of Lancaster, was the mother of Henry IV and the grandmother of Henry V. It is through this line that the Tudors began to gain prominence. Through his third wife, Catherine Swynford, the Beaufort line was established, and these two lines married into each other to create the Tudor dynasty.

Owen Tudor and Catherine of Valois: The Forbidden Marriage

Owen Tudor was originally named Owain ap Maredudd ap Tudur. Following the death of her husband Henry V, Catherine of Valois fell in love well below her station with her husband’s master of the wardrobe, Owen Tudor. The time when Owen came to Catherine’s attention is shrouded with rumour and mystery. Some suggest that he was physically attractive and intelligent, others suggest she saw him swimming naked and fell in love; de Lisle believes, however, that the most likely story is that during a party Owen made a leap and lost control, falling in her lap. As one Elizabethan poet put it, “Who would not judge it fortune’s greatest grace, since he must fall, to fall in such a place?”  Of course, it is difficult to know the truth of how they fell in love, as the records we have are not clear. Against the orders instituted by the Duke of Gloucester, Catherine is thought to have married Owen in 1429 without the permission of her young son and his council. De Lisle suggests that the Duke’s attempt to forbid her remarriage turned Catherine into a bitter and rebellious twenty-year-old woman. She proceeded to bear Owen four children, including Margaret Beaufort’s later husband, Edmund Tudor, and the man who effectively brought up Henry VII and helped him win on the battlefield at Bosworth, Jasper Tudor. Upon the death of Catherine in 1437, Owen was imprisoned and escaped twice, only being released in 1439. He was executed following the Battle of Mortimer’s Cross by the future Edward IV. Owen’s sons Edmund and Jasper were the first Welshmen to be knighted, by their half-brother Henry VI.

Margaret Beaufort: Mother of a Dynasty 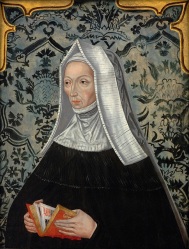 In 1455, Edmund Tudor married Margaret Beaufort. Margaret was directly descended from the line of John of Gaunt and Catherine Swynford (often known as Catherine de Roët). This line was illegitimate due to the fact that John of Gaunt and Catherine Swynford had not been married when Margaret’s grandfather was born. Her original summons to court had come when she was only 9 years old; at the time, although the only child of her father and mother, Margaret enjoyed the company of a large extended family and passed her childhood as a relatively well-loved girl. She was the sole heiress to an incredibly wealthy estate, making her an appealing partner despite the illegitimacy of the line in royal terms. Margaret became pregnant, giving birth at the age of 13, having being left by her husband, who was fighting in the ever-brewing Wars of the Roses, during her pregnancy. In fact, Edmund Tudor died before she had even given birth to their son. This child would be her only one, with many believing that a difficult birth at such a young age prevented her from having any more children. This child would become the future Henry VII. Before Henry’s first birthday Margaret had been remarried to a man of royal blood (although with no claim to the throne), Sir Henry Stafford, who was devoted to her. She was curious and intelligent, and, with age, became more pious. After Henry VII had defeated Richard III at the Battle of Bosworth, one of his first acts was to grant his mother the Palace of Coldharbour.

Jasper Tudor was a man who dedicated himself to a cause – he made it his life’s work to restore the Lancastrian line to the throne, particularly through the loyalty held by the Tudors in Wales. Jasper had taken in his young and pregnant sister-in-law Margaret Beaufort after her husband’s, and his brother’s, death. After the outbreak of the Wars of the Roses, Jasper headed many campaigns and was heavily involved in strategy, supporting the Lancastrian cause. Jasper posed a great threat to the Yorkist cause as a result of his military prowess and links to a possible Lancastrian heir. On the 4th November 1461, Jasper Tudor and his nephew Henry were formally attainted by the newly-crowned Edward IV’s first parliament. Jasper’s former ally, William Herbert of Raglan, was showered with gifts, presumably to keep him on the Yorkist side, and he was given the custody of Henry Tudor. In the meantime, Jasper had been forced to flee to Margaret of Anjou’s court in Scotland, before travelling to Brittany and then Burgundy. In the late 1470s, a young Henry Tudor joined his uncle in exile as his life was endangered by Yorkists. Upon Richard III’s usurpation it would seem that support swung slightly towards the Tudors. On the 7th August 1485, the Tudor force, with Henry and Jasper, landed in their homeland of Wales. It is reported that Henry kissed the floor upon their landing. Throughout Wales they were happily received. Their success at Bosworth was, in part, due to the distrust of the usurper King Richard III. However, without Jasper’s continued pressing forward and his military experience, the Tudor cause may well have struggled much more on the path to the throne, and perhaps never even reached it.

Conclusion: The Tudors and the Throne

Jasper Tudor did not take revenge on his enemies upon his nephew’s succession to the throne. On the 28th October 1485, Jasper, Earl of Pembroke, was given the title of the Duke of Bedford. It was rumoured that he would marry Margaret Beaufort as the two, it was suggested, were in love. This did not happen, probably due to the Church’s view that brothers- and sisters-in-law were effectively brother and sister, thus meaning that they would be breaking church law. Jasper married the younger sister of Elizabeth Woodville (Edward IV, the Yorkist king’s, wife), Katherine. Like his nephew’s marriage to Elizabeth of York (Elizabeth Woodville’s daughter), this was a union between York and Lancaster. Henry VII annulled many of the acts that had been put in place against Welshmen. Jasper became his Privy Councillor, although Henry had to be reliant on those who had served under his Yorkist enemies for much advice. Jasper died on the 21st December 1495. However, he fought for a dynasty which lasted over a century, from his nephew’s accession on the 30th October 1485 until the death of Elizabeth I on the 24th March 1603. The dynasty did not run a smooth course, with many bumps along the way, including plunging Britain into a religious war between Catholics and Protestants. However, the dynasty also boasts some of the most famous monarchs to have ever ruled England.

← The Crown: monarchy on screen
The Devonshire MS: Women and Literature →

2 thoughts on “The Tudors before the Tudors”