The Battle of the Somme film review

‘The most gigantic, tenacious, grim, futile and bloody fight ever waged in the history of war’

So said David Lloyd George on the Battle of the Somme. The Somme has become ingrained in our national identity. It has come to symbolise the extreme loss of life that was the First World War.

On the 5 November 2016, to mark the centenary of the Battle of the Somme, the York Army Museum hosted a screening of The Somme, with a discussion afterwards led by Professor Andrew Higson.  The film included a score composed by Laura Rossi in 2006. The score mimics what is taking place on screen. The various sounds of the battle, for instance gunfire and shelling, were represented by various instruments. The booming timpani played the part of large artillery and high strings that of rapid machine gun firing. The score deepens the sobering effect of the film: it increases the tension and provides background interest for the landscape shots.  Higson drew on key themes in the discussion that followed the screening. The Somme was released in 1916, the first feature-length film to be filmed around an actual battlefield. The film was immensely popular when first released, with over 20 million tickets sold. In the present day, The Somme is rarely viewed in its entirety, yet it is certainly worth doing so . It  is a compelling piece of historic cinema from which you cannot draw your eyes away 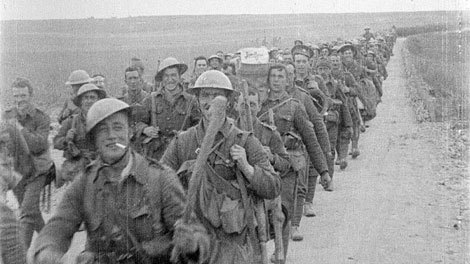 The discussion’s first talking point was the question ‘Why did people go to see the film?’ Higson started this discussion by showing a clip of the York and Lancaster Regiment parading through York in 1915. The scenes of hundreds of people lining the streets helped to answer this question. People went to see the film, primarily at least, because they wanted to see their boys. Thousands were trying to see a familiar face in the masses of soldiers shown in the film, their husbands, brothers, and sons. The filmmakers deliberately filmed as many different regiments as possible in order to try and fulfil this desire. Not only did thousands flock to see their own family and friends, but  they also wanted to see the heroes that would defeat the Germans. For some, there was a more sombre reason they went to see the film. It may have provided closure for those who had lost family in the war, perhaps even in the battle itself.

The conversation then turned to exploring why the film was produced. At first glance it was simply a propaganda film. Its purpose in this regard was to rally civilian support for the war effort. Munitions feature in the footage just as much as soldiers do, and this demonstrated to munitions workers on the Home Front how important and crucial their work was – especially after the Shell Scandal of 1915. There is also a deeper level of propaganda at play. It could be seen as soft propaganda – it shows the brutal realities of war, with mass graves and bodies by the roadside. The Somme is, in effect, an anti-war film. The filmmakers and the war office wanted to end the war and the endless bloodshed that was going on in France and Belgium. At this time both sides wanted America to enter the war as their ally. The War Office in particular wanted to persuade America to enter the war. The British wanted to shock the Americans; they wanted to show the horrifying nature of the war in Europe (whilst blaming this horror on the Germans) in order to encourage the US to join them in the conflict. It was believed that the United States would end the war.

It is worth considering whether the film was successful in its ambition. It may not have brought the US into the war, but it was successful on a personal level. Though the film shows the realities of the conflict, the modern day viewer can easily see why people rushed to see it. The soldiers depicted seemed closer to the audience through the medium of film, which gave grieving and concerned Britons much-needed closure. The film was a morale booster – the soldiers are smiling and happy despite their grim situation. It gave families hope that their boys were ok, that they were well-fed and happy. The direness of their situation also, in all likelihood, gave civilians an impetus to work harder on the Home Front in order to win the war faster.

Furthermore, the Somme (both the battle and the film) has a legacy that echoes through the ages. The Somme doesn’t quite seem like history. It has remained in popular memory and culture, and everybody knows and recalls the iconic scene of the men walking into No Man’s Land. Our image of the First World War stems from the Somme. It may well be a long time before it feels historical, as it seems so close to us – it seems culturally closer than previous wars. During the talk, there was a father with two young boys sat at the back of the audience. The father was talking his sons through the film, describing what was happening and reading the title slides out to them. There was one moment which I feel really sums up the feeling that surrounds the Somme. A group of soldiers was shown and the father whispered, “That’s Daddy’s regiment.” It won’t resemble other, more distant historical studies whilst there are still people alive who feel so connected to these men in The Somme.

Professor Higson explained that the major effect of the film is that it really brings the war home. It did so  for the 1916 audience just as it does now for viewers in 2016. The men are not lost or forgotten, they are forever immortalised in film. It offers another valuable way to learn about the war, bringing with it insight into the experience on the field and on the Home Front. It must be remembered that according to Higson, many of the men shown would have been killed or injured shortly after filming. They may have been killed in the Somme itself. The central question of why The Somme was made was brought up again at the end of the session. The Somme was successful in showing people the First World War. After all, we are still watching it aren’t we?

← Banners and Blazons: Introducing Heraldry to History.
“How can life go on?” Reflections on the Holocaust and its Aftermath →