Why Did Elizabeth I Never Marry?

Elizabeth I is arguably one of the most famous monarchs in English history. We remember her as the Queen that defeated the Spanish Armada, who achieved national stability, and, perhaps most importantly, who proved that a woman could successfully reign as a monarch. However, we also remember her as the Virgin Queen who never married and who subsequently let the Tudor dynasty die out. So why did she never marry and produce England with the heir that may have ensured the peace she had worked so hard for? An exploration of this question reveals the complex political, social and personal issues that surrounded Elizabeth as a female monarch in 16th century England.

A Foreign or Domestic Marriage?

When investigating this question, it is necessary to engage in some investigative history. If Elizabeth were to marry, who would have been the candidates? Elizabeth, and indeed the nation, had learned the hard way the problems that came when a reigning Queen married a foreign monarch when Mary, Elizabeth’s sister and p
redecessor, had married King Philip II of Spain. This was an unpopular decision, and led to Wyatt’s rebellion in 1554, which voiced many people’s worry of a foreign King ruling in England. After Mary’s death in 1558, Philip attempted to hold his grip on England by offering marriage to Elizabeth, however she was reluctant. This led to many years of poor Anglo-Spanish relations, during which Philip supported Elizabeth’s cousin Mary, Queen of Scots in her claim to the English throne, which was potentially threatening to England’s stability. In spite of this, after nearly twenty years of courting marriage proposals, Elizabeth herself seriously considered marrying a foreign prince, in the shape of Francis, Duke of Anjou who, although being over twenty years her junior, she became smitten with. Her privy councillors, however, were divided on the match and this, combined with the fact that he was unpopular in England, meant Elizabeth never married him out of fear of following in her sister’s footsteps. Marrying a foreign monarch was therefore problematic as it ran the risk of opening England up to foreign rule and as such was very unpopular amongst courtiers. Ultimately, this may have been a factor in Elizabeth’s hesitation in marrying a foreign prince. 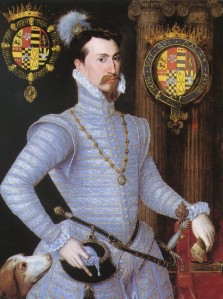 Should Elizabeth therefore have married an English nobleman, which would prevent the risk of foreign interference? By the time Elizabeth became Queen in 1558, the Tudor court was dominated by faction, which revolved around the privy chamber. The idea of the privy chamber being the centre of the royal court was a principle that had been successfully cultivated by Henry VII and Henry VIII to ensure that attention always revolved around the monarch. Subjects formed into groups dictated by family and political interest, and competed with each other for the monarch’s patronage and favour, which was displayed by positions within the Privy Council. If Elizabeth had married an English nobleman, it is a possibility that it would have caused dissention in her court; by marrying in this way she would have been permanently raising one family above another, thus nullifying the purpose of a factional court and possibly causing disputes between the nobility as one family was shown a favour denied to the others. Indeed when Elizabeth was seriously considering Robert Dudley, Earl of Leicester, (her lifelong friend for whom she almost certainly held romantic feelings) as a husband, the nobility threatened to rise up in revolt as they disproved of the match. The practical realities of Elizabeth choosing a person to marry were complex; any decision she made would have had consequences, which may have jeopardised her position as a credible ruler. 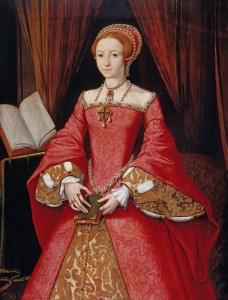 Elizabeth aged 13, not long before she lived in the household of Thomas Seymour.

It is also interesting to remember Elizabeth’s own personal experiences with marriage. Her father, Henry VIII, had been married six times, divorcing two wives and executing two more, one of which was Elizabeth’s own mother, Anne Boleyn. Anne had been executed when Elizabeth was not even three, and only three years into her marriage to Henry after she failed to provide him with the son and heir Henry so longed for. Elizabeth’s childhood was characterised by a series of stepmothers and a father who declared her a bastard, and who rarely saw her as she grew up away from court in Hertfordshire. After her father’s death in 1547 she lived with his widow, Catherine Parr, and her new husband Thomas Seymour. During this time Seymour developed an inappropriate attachment to the 14-year old Elizabeth, which included Seymour making early morning trips to Elizabeth’s room in his nightclothes, tickling her and kissing her, which many have construed to be sexual abuse on Seymour’s part.
This traumatic and strange childhood may have scarred Elizabeth; marriage had been the failure of both her parents, and exposure to sexuality in an inappropriate way as a child may have left her feeling uncomfortable with the idea of sexual relations. Whether these events directly affected her decision not to marry is impossible to tell, however these experiences are important when considering how Elizabeth may have viewed marriage and relationships when she grew up.

The Cult of Elizabeth

After many years of tentatively considering the many marriage offers she received it became clear to many that Elizabeth was never going to marry, whether by her own choice or by the advisement of her minsters. This led to her being depicted as a virgin by some, something that eventually became one of the characteristics for which she was known. Many paintings of her depict her wearing pearls, with her hair down or with a sieve or ermine, all of which symbolised her chastity and reminded all who saw them that she was the Virgin Queen. Elizabeth even alluded to her virginal image in her behaviour during religious courtly ceremonies, associating herself with the Virgin Mary. Rumours circulated during her reign of the possibility that she knew she was infertile, and that because of this she wouldn’t marry; her image as a virgin was as much applauded as it was a victim to cruel gossip. Historians have also hypothesised that Elizabeth was worried that if she married, then the power she asserted would be lessened. As a wife she would become the property of her husband under common law in England during the time; if she were to have children, her role would be to raise them. Her family would have served as a constant reminder that Elizabeth was a ‘weak and feeble’ woman, and would not have worked cohesively with her image as a powerful monarch. Instead, she played on her image as a Queen of virtue, entertaining suitors, but ultimately maintaining her power as a fiercely independent woman, with the temper of her father.

Many theories have been put forward as to why Elizabeth never married, from political to personal, but for all the disagreement between historians on Elizabeth’s motivation it is impossible to know her true intentions. She cleverly manipulated her image to represent a strong, powerful and successful monarch, as her predecessors had done, whilst simultaneously forging her own representation of femininity, characterised by chastity, power and iron will. Ultimately, these are the reasons that she made a strong monarch, but also what we remember her for.

Doran, Susan. Monarch and Matrimony: The Courtships of Elizabeth I. London: Routledge, 1996.

← Jinnah: Hero or Villian?
The Myth of Marie Antoinette →